H.E. Mr. Mikio NUMATA, Ambassador Extraordinary and Plenipotentiary of Japan to the Republic of the Union of Myanmar, and U Kyaw Soe Hlaing, Executive Director of Myanmar Peace Center (MPC) signed a grant contract US$1,210,524 today at Embassy of Japan under the Grant Assistance for Grassroots Human Security Projects (GGP) Scheme.

The Government of Japan has committed to support the efforts of Myanmar for peace building and reconciliation as well as improvement of the livelihoods of the Myanmar people, including the ethnic groups.

Since its opening in November 2012, MPC has been playing a pivotal role for inclusive dialogues for peace building in this country.

The Government of Japan is going to provide MPC with more offices, meeting spaces as well as furniture and electric materials.

The Government of Japan also is supporting Japan Platform (JPF) to improve the livelihood of the people in the areas. It is coordinating with 11 Japanese NGOs to start the assistance in Kayin State. Its expected that JPF will be allocated US$ 11 million for the next three years. Japan Platform will channel fund directly to Japanese NGOs that will implement projects in Kayin State.

The Government of Japan recognizes the importance to further reforms in Myanmar, and therefore continuously supports the domestic efforts so that the people of Myanmar can feel the fruit of democratization, national reconciliation and economic reforms. 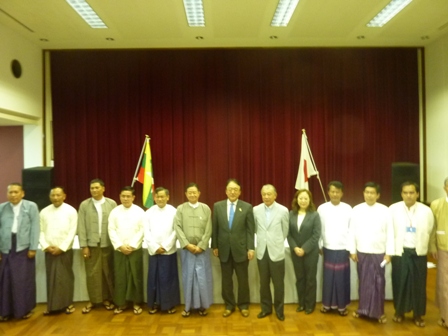